A specialist of technical watches, Breitling has played a crucial role in the development of the wrist chronograph and is a leader in this complication. The firm has shared all the finest moments in the conquest of the skies thanks to its sturdy, reliable and high-performance instruments. One of the world’s only major watch brands to equip all its models with chronometer-certified movements, the ultimate token of precision, Breitling is also one of the rare companies to produce its own mechanical chronograph movements, entirely developed and manufactured in its own workshops. This family business is also one of the last remaining independent Swiss watch brands.

A brand long associated with aviation, Breitling was founded in Jura Switzerland in 1884 by Leon Breitling. The brand is renowned for being a specialist of technical timepieces and played a pivotal part in the development of the world’s first chronograph.

In 1915, Breitling invented the first independent chronograph push-piece. The brand in 1923 perfected the system of the stop/start functions from that of resetting a mechanism. This was extremely valuable for the timing of sporting events and calculation of flight times. Breitling designed the second independent reset push-piece in 1934, a decisive breakthrough in watch-making history.

Breitling introduced a range of specialty onboard aviation chronographs for use in aircraft cockpits in the 1930’s, which were immediately indispensable for pilots and were employed by the British Royal Air Force in World War II on fighter planes.

Breitling solidified its aviation reputation in 1952 with the introduction of the legendary Navitimer chronograph, a mechanical timepiece which featured a slide-rule bezel to perform navigational functions. The Breitling Navitimer immediately became a favorite of pilots and is one of oldest mechanical chronographs still being produced today. It also remains the first timepiece choice for professional pilots around the globe.

Breitling today holds the distinction of being an independent, family-owned watchmaker for over 132 years, a feat unparalleled in the watch making industry. Each and every timepiece produced by the Breitling is manufactured at their plant in La Chaux-de-Fonds, Switzerland. Breitling is also one of the only watch brands to submit all of its timepieces, both automatic and quartz to the Swiss Chronometer Testing Institute for official Chronometer certification.

1884: In St-Imier, in the Jura mountains of Switzerland, Leon Breitling opens a workshop specializing in the making chronograph pocket watches and precision counters for scientific and industrial purposes

1892: Leon Breitling relocates in La Chaux-de-Fonds, the center of Swiss watchmaking of the day.

1915: During WWI, Recognizing rapid advancements in aviation and the need for a precision timepiece for that purpose, Gaston introduces the first wrist-watch chronograph providing pilots with the first Breitling wristwatch.

1932: Gaston’s son, Willy Breitling, takes over for his father as the head of the company.

1934: Breitling develops a watch with a second return-to-zero pushpiece.  This invention, made it possible to measure several successive short times with an added function using the first pushpiece, and gives the wrist chronograph its difinitive form. 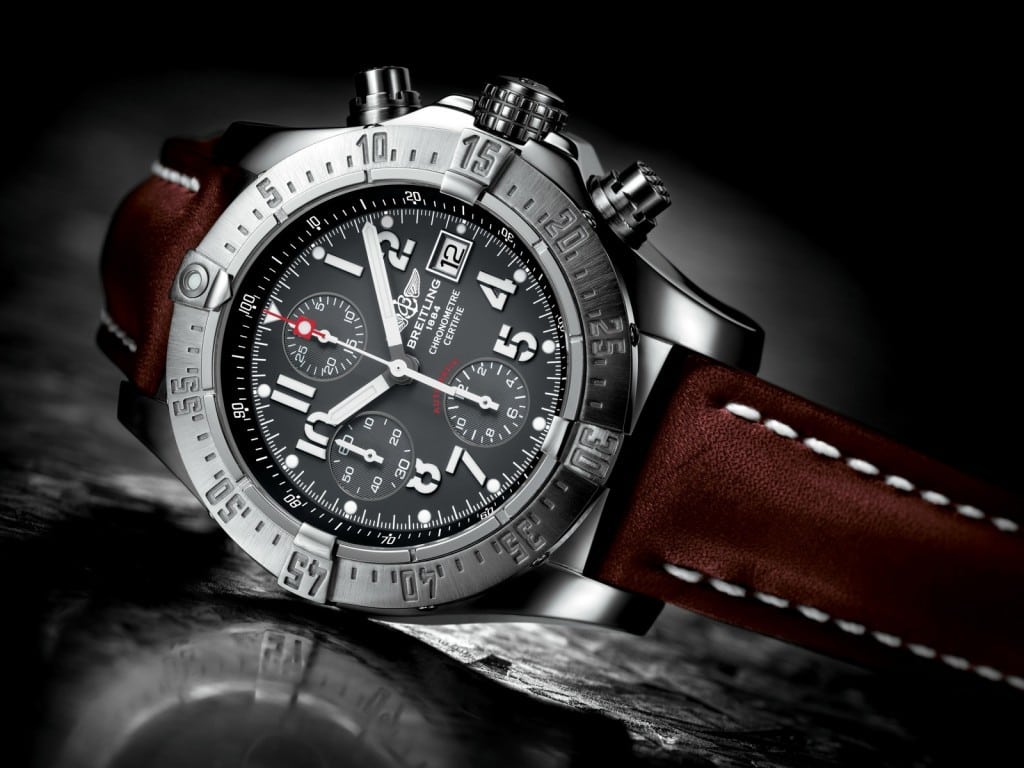 1936: Breitling becomes the official supplier to the Royal Air Force.  This difinatively marks the start of its longstanding ties to aviation.

1942: Breitling launches the Chronomat, the first chronograph to be fitted with a circular slide rule.  In parallel, the company broadens its professional clientele to include the American armed forces.

1952: Breitling creates the Navitimer, a wrist instrument equipped with the famous “navigation computer” capable of handling all calculations called for by a flight plan.  This “super” chronograph quickly becomes a favorite among pilots around the world.

1962: Astronaut Scott Carpenter wears the Cosmonaute chronograph during his orbital flight aboard the Aurora 7 space capsule.

1979: Ernest Schneider – a pilot and watch manufacturer takes over as the head of Breitling.

Present: The company continues to produce timepieces of the highest quality in the world.

This information was obtained from the Breitling Company